In February 2002 Hofstra University President Stuart Rabinowitz announced that the University’s 13,000-seat stadium, home to Hofstra’s Football, Lacrosse and Field Hockey teams, would be named James M. Shuart Stadium at Hofstra University. On August 29, 2002, the Stadium was officially dedicated.”During Dr. James M. Shuart’s 25 remarkable years as president of Hofstra University we grew from a fine regional institution to an internationally recognized university. Although every aspect of this University has benefited immeasurably from Jim Shuart’s leadership, we believe that his roots as a student athlete and his support of our fine athletic program makes the naming of the stadium particularly appropriate. By doing this we convey our admiration and respect for James Shuart to the thousands of individuals who use the James M. Shuart Stadium at Hofstra University each year,” said President Rabinowitz.
“Many remarkable dreams become reality at Hofstra thanks to the dedication and hard work of the University’s trustees, administrators and faculty. As president I worked closely with my Hofstra colleagues on projects such as the stadium. Hofstra’s marvelous stadium provides students, alumni, visitors and friends with a first-class venue. It is one of the top on campus intercollegiate sports facilities, indoor or outdoor, in the New York metropolitan area. I am truly honored that the Hofstra Board of Trustees has decided to name its stadium the James M. Shuart Stadium at Hofstra University,” said Hofstra President Emeritus Dr. James M. Shuart. 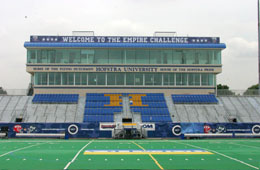 The $9 million project included the expansion of the seating capacity from 7,000 to 15,000; the installation of a network-quality lighting system for television broadcasts; an Athletic Department office building, which includes a press level and a club suite level; two entrance plazas on the south and west sides of the Stadium; a facade around the outside of the Stadium; additional parking and landscaping; a pavilion in the southeast corner of the Stadium; concession and souvenir areas; two locker rooms; the installation of a state-of-the-art scoreboard in the south end zone; and the reinstallation of a scoreboard in the north end zone. James M. Shuart Stadium is the largest outdoor sports and entertainment complex on L.I.
“The renovation and expansion of the Stadium provides our students, alumni, visitors and friends with a first-class facility in which to practice, play or watch their favorite sport,” stated then-President Shuart. “It is one of the top on-campus intercollegiate sports facilities, indoor or outdoor, in the New York metropolitan area.”Opened in 1963, Shuart Stadium has served as the site for NCAA Championships, Nassau County and New York State High School Championships in football and lacrosse, world championships in men’s and women’s lacrosse, professional soccer, commencement exercises and cultural events. In 1968 Hofstra Stadium became the third college facility in the nation to install an artificial playing surface, following the University of Houston (The Astrodome) and Indiana State University (Memorial Stadium).
Shuart Stadium has become a focal point of the Long Island sports scene in recent years, serving as the home of the NCAA Division I Men’s Lacrosse Championship Quarterfinals, conference championships, the Outback Steakhouse Long Island All-Star Football Game, the Hero’s Bowl, the Long Island Lizards of Major League Lacrosse, various Long Island high school and New York state championship games and the 1999 Empire State Games. The Stadium also served as a home for the Long Island Rough Riders of professional soccer’s A-League.
The two largest crowds in Hofstra Stadium history occurred during the hosting of the NCAA Lacrosse Quarterfinals. A crowd of 12,292, an NCAA men’s lacrosse championship quarterfinal record and the largest-ever lacrosse crowd on Long Island, witnessed the 1999 NCAA quarterfinals featuring Hofstra versus Johns Hopkins and Duke versus Georgetown, and 10,510 fans attended the 2001 quarterfinals that featured Hofstra against Syracuse.

In addition to the recent renovations, within the past decade the Stadium has received a new balsam turf playing surface, several sections of new chair-back seating, a new sound system and the $3.8 million Joseph M. Margiotta Field House in the south end zone.